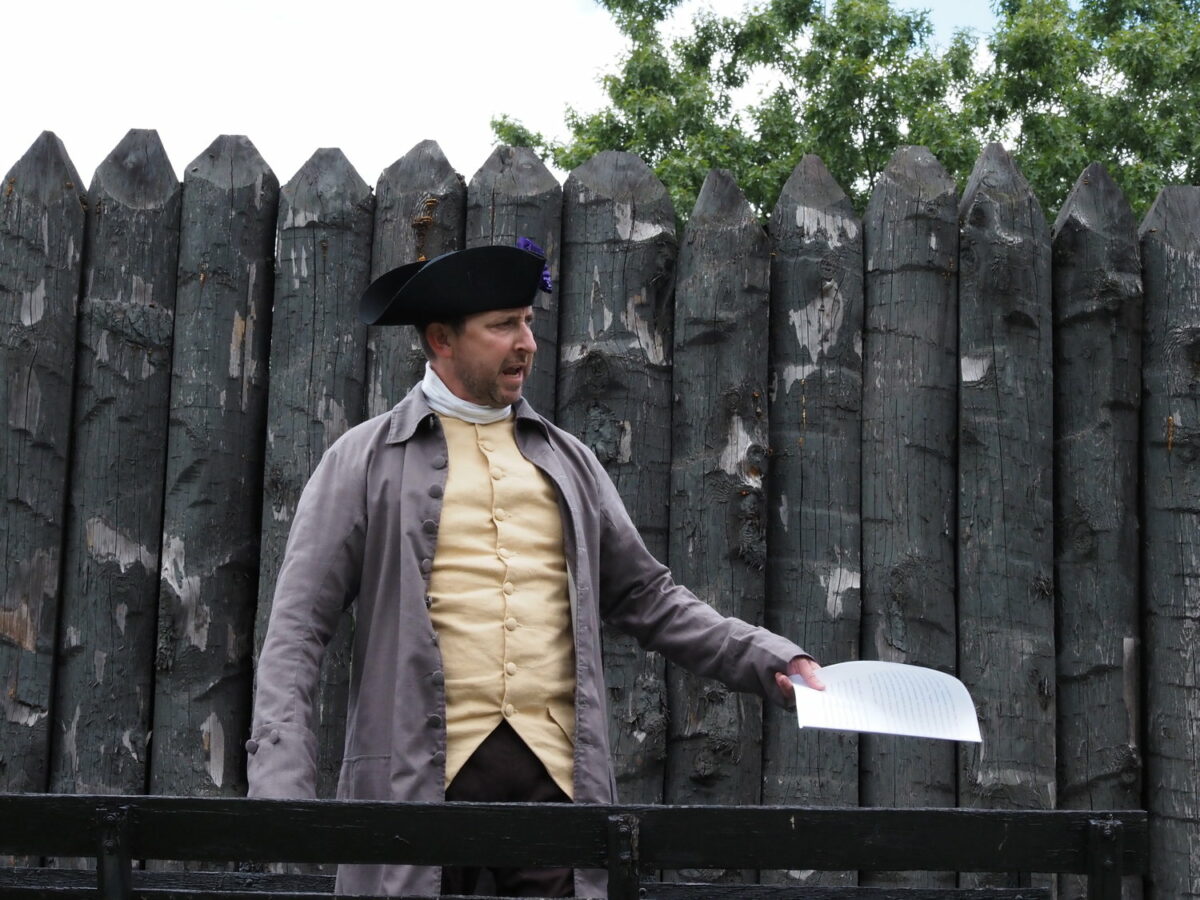 NARROWSBURG — Due to the efforts of The Delaware Company and many volunteers, Saturday’s revival of activities at Fort Delaware Museum of Colonial History was a great success. It attracted over 120 people, and enhanced the colonial vibe of the stockaded settlement.

Basking in the sun that was a welcome change from recent rains, even the herb garden outside the gates appeared well-tended, despite a year’s absence of an audience.

The 18th century atmosphere was aided by volunteers in colonial garb whose descriptions were informative, and sometimes amusing.

George Kane of the Navasing Long Rifles reenacting group demonstrated several ways a saber can be lethal, and how privateers were ruthless in a fight.

In one of the settler’s cabins, Nancy Walter showed that despite their supposed frailties, pioneer women were resilient, and often armed with a club or a knife in the waistband of a petticoat, as well as a needle and thread.

The work of a blacksmith on the frontier was demonstrated by Anthony Domingo of the Navasing Long Rifles, including how the newly-refurbished bellows worked to stoke the coal fire.

Charles Redner of the 1st Ulster Militia out of Kingston kept a watchful eye out for any disturbance of the peace.

In the armory, where the settlement kept extra weapons and gun powder, Mark Walter explained the use of various period arms that were displayed.

The musical contributions of Linda Russell were a highlight, as she performed several times, with a variety of instruments that complemented the activities.

The demonstrations of colonial life were engaging, and the many questions asked were answered readily by the volunteers. Although there was a limit to the number of people who could fit in the demonstration areas, and some patience was required, all seemed to take it in stride.

After a short time, a courier (portrayed by John Conway, Delaware Company president) arrived from Philadelphia to tell the news about the Continental Congress enacting the Declaration of Independence.

In his role as the area magistrate, Richard Land voiced his objections in response, in words penned by the man portraying him, Bill Chellis. Chellis is on The Delaware Company’s Board of Directors. His wife, Katrina Chellis, and daughters Mary and Elizabeth showed their support, also in colonial attire.

As a salute to the news and the revival of activities at the fort, members of Company K of the 143rd New York Volunteers Civil War reenactors fired a mortar blast.

If Saturday’s event is any indication of The Delaware Company’s ability to entertain and present historically accurate programming at Fort Delaware, then let the vibe thrive on! If you would like to support their mission, checks payable to The Delaware Company may be mailed to P.O. Box 88, Barryville, NY 12719, with “Fort Delaware” on the check’s memo line.

Original article can be found here.