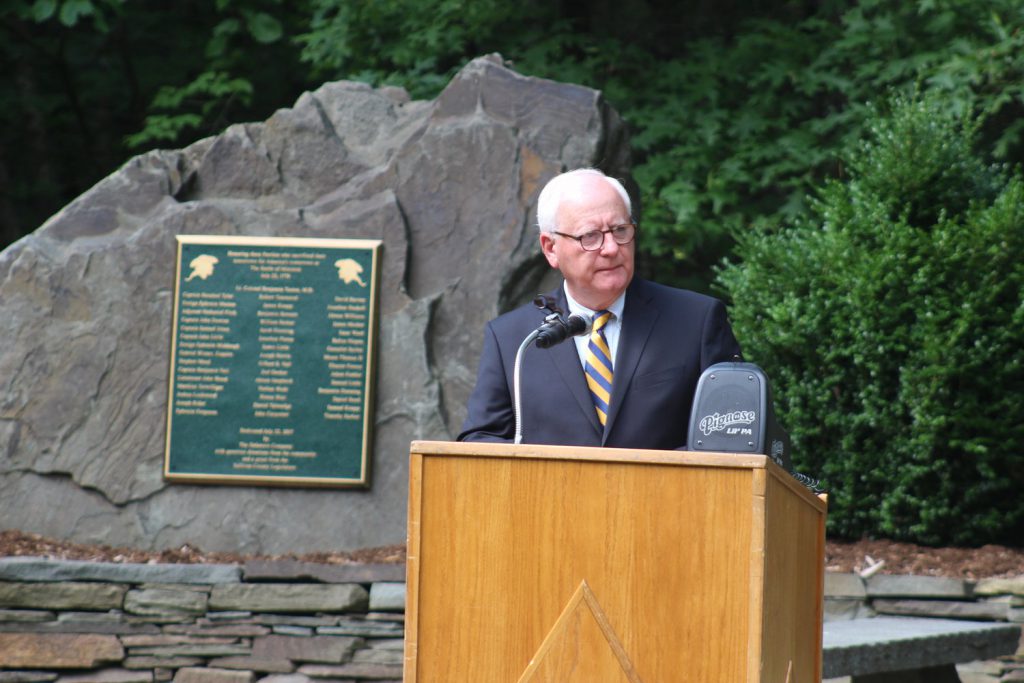 The Delaware Company was founded in 2012 with the mission to preserve and support the history and historic landmarks of the Upper Delaware River Valley and beyond. Since that time, the organization has sponsored many events, including the annual commemoration of the Revolutionary War Battle of Minisink each July, an annual oratory competition for high school and middle school students, history hikes at various venues, and a succession of six-week long History of Sullivan County courses. The Delaware Company has also collaborated with municipalities and other non-profit groups such as the Museum at Bethel Woods, the Sullivan County Historical Society, the Greater Barryville Chamber of Commerce, etc. on other projects such as historic markers highlighting the D&H Canal and the timber rafting industry and historical interpretive signs in the hamlet of Barryville. Other completed Delaware Company projects include:

THE UPPER DELAWARE’S FIRST SUSPENSION BRIDGE HISTORIC MARKER (2021) – The D&H Canal effectively created the community of Barryville shortly after it began operation in 1828. At that time a ferry boat linked Barryville and Shohola, PA on the opposite side of the Delaware, and that means of conveyance proved adequate in providing a way to get goods and people across the river until the Erie Railroad arrived in Shohola in 1849. At that point, the need for a bridge spanning the Delaware had become obvious.

In 1854, the Barryville and Shohola Bridge Company was formed in order to construct a suspension bridge to connect the two communities.
Contractor Chauncey Thomas of Shohola, PA built the bridge using written instructions provided by renowned suspension bridge designer John A. Roebling, and the resulting ten-foot-wide, single-lane, single-span bridge, 495 feet in length, opened in October of 1855, the first suspension vehicular bridge in the upper Delaware River valley.

The abutments for that suspension bridge remain, and on June 12, 2021—John A. Roebling’s birthday—a new historic marker was unveiled at the site of the abutment by Delaware Company Executive Director Debra Conway—who, incidentally, shares the birthday with Roebling. The marker was procured by The Delaware Company, with funding provided by The William G. Pomeroy Foundation.

THE MINISINK PROJECT (2017) – Although historians are unsure of the exact number of Patriots killed at the Revolutionary War Battle of Minisink on July 22, 1779, it is generally believed that 46 men died that day. Sadly, no one claimed the remains of the fallen for 43 years, and it wasn’t until 1822 that an expedition was mounted to scour the area around the hilltop for bones. About 300 were recovered and taken to Goshen for burial in the village square in a solemn ceremony attended by 15,000 people.

The battleground itself was rescued from an encroaching quarrying operation when the Minisink Valley Historical Society purchased it in the 1890s. It has been operated as a public park by the Sullivan County Division of Public Works since 1955.

A monument was erected and dedicated on the centennial of the battle in 1879, a plaque was added in 1929, and each year a hundred or so still gather there for a commemoration, during which the names of the fallen are read, one by one.

But inexplicably, there had never been a permanent marker listing the names of those men who lost their lives that day, whose sacrifice, along with that of thousands of others who gave their lives in the War for Independence, made possible our new nation.

So, Debra Conway, the Executive Director of The Delaware Company, conceived a project to rectify that. She designed a suitable monument, which included a plaque listing the names of each of the fallen, and spearheaded the effort to raise funds for the project. The monument was dedicated as part of the annual commemoration of the Battle, on July 22, 2017.

THE FUTURE OF HISTORY CONFERENCE (2015) – In November of 2015, The Delaware Company collaborated with the State University of New York Sullivan County to host the first Future of History conference at the college. Municipal historians, educators, archivists, librarians, genealogists reenactors, politicians, planners, tourism professionals and students from around New York State took part. The conference was conceived and facilitated by Delaware Company Executive Director Debra Conway, and featured ten different presenters– including County Historians from three counties– and an introduction by Congressman Chris Gibson.

THE MAGICAL HISTORY TOUR (Annual) – In 1996, architect Robert Dadras, who would later join The Delaware Company as a member of its Board of Directors, conceived the idea of loading people on a bus and touring a portion of Sullivan County via a planned itinerary, discussing architectural and historical landmarks as a fundraiser for the area’s public radio station. Thus was the annual Architectural/Historical Bus Tour was born. By the third year of the event, Dadras had been joined as narrator by Sullivan County Historian John Conway, who would later be a founder of The Delaware Company, and the Architectural/Historical Bus Tour evolved into The Magical History Tour. Until temporarily halted by the COVID pandemic, the tour entertained and informed hundreds of participants while raising money for several non-profit organizations. The Delaware Company assumed sponsorship of The Magical History Tour in 2014, typically in conjunction with the New York State Path Through History Weekend.