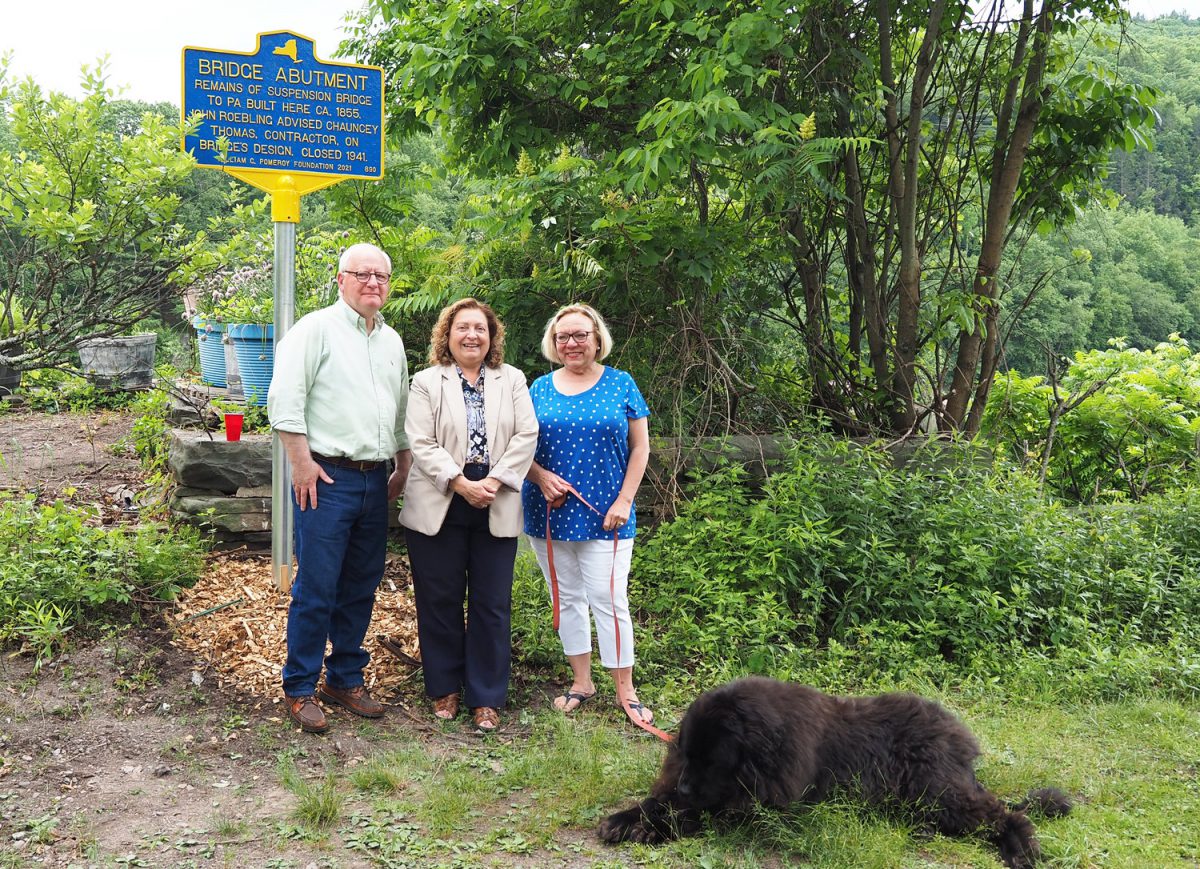 Another piece of history has been conserved in Barryville, this time in the front yard of Matthew and Leslie Smith, whose house overlooks the Delaware River.
On Saturday, June 12, Town of Highland Co-Historian Debra Conway and Sullivan County Historian John Conway thanked the Smiths as a new historic marker was dedicated, remembering the former Barryville-Shohola suspension bridge at this place. Nearly 30 people joined in the celebration. Credit was also given to Highland’s Town Highway department for installing the marker, which was funded by the William G. Pomeroy Foundation.

The historic marker was obtained by the non-profit history education group, The Delaware Company, of which Debra Conway is Executive Director. July 12 is also the birthday of John A. Roebling, the man who is credited with providing plans for this bridge that linked Barryville with Shohola, Pa. Debra Conway mentioned that the bridge’s builder, Chauncey Thomas of Shohola, is a direct descendant of Moses Thomas, a member of the original Delaware Company. The elder Thomas hailed from Preston, Connecticut. These settlers are said to be the first permanent English settlement in the Upper Delaware region (1754-1764).

John Conway said that researching the Delaware River ferry that connected the two communities drew his attention to the bridge. The growth of Sullivan County, and Barryville in particular, increased after the D&H Canal was built in 1828. The nearby community of Shohola, Pa. also began to be more developed after the arrival of the Erie Railroad in 1849. Conway explained that because of the influx of people and the need to bring more goods into the area, the river ferry that previously connected Barryville and Shohola was no longer sufficient. The need for a bridge connecting the communities was evident.

In 1855, when the Barryville-Shohola bridge was erected, it was a single span nearly 500 feet in length. But it was repeatedly battered by the elements of nature, until it was finally destroyed in 1866. The next bridge that followed, built with a center pier, lasted until 1941. The historical marker’s location is at this final bridge’s abutment, and the bridge’s cable anchors remain in place in the Smiths’ lawn, even though the bridge was dismantled nearly 80 years ago.