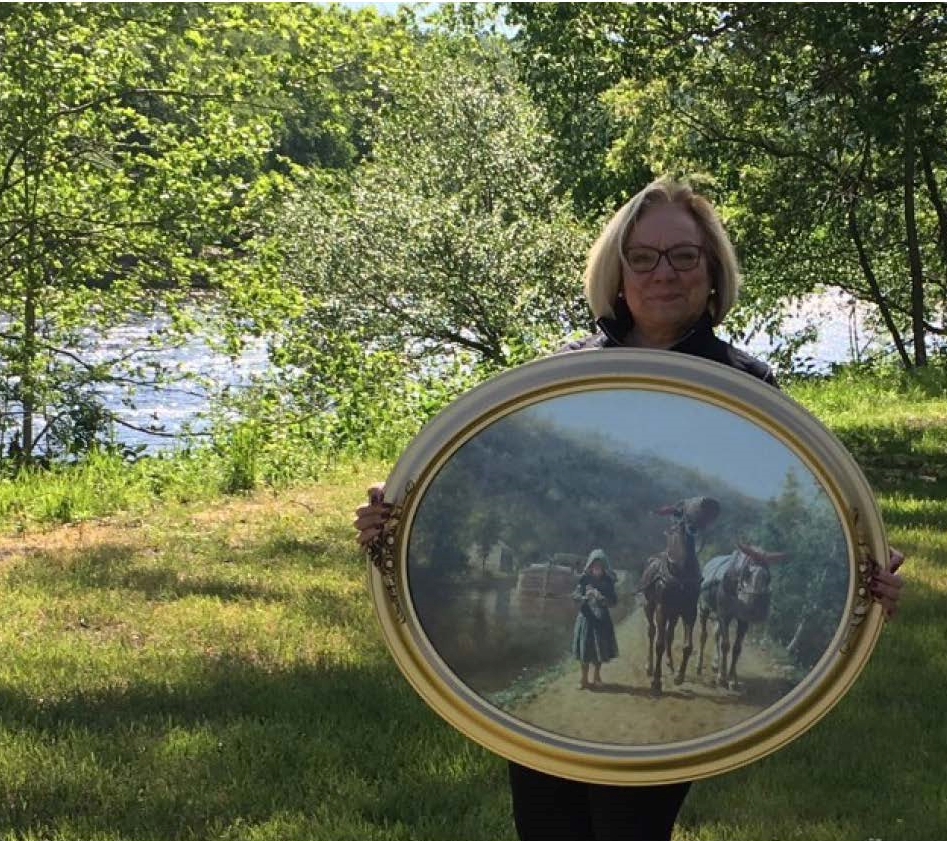 MINISINK FORD, NY — If you traveled along Route 97 through Barryville and Minisink Ford about 150 years ago, you would be floating, not driving—and your conveyance would not be a car, but a canal boat.

As visitors buzz up and down the riverside road, it’s difficult to imagine those coal- and bluestone-laden barges towed by a mule. It’s even more difficult to conceive that it was children who led those mules on their journeys.

The Kate Project, the brainchild of local historian Debra Conway, hopes to change all of that.

“The D&H Canal is what put us on the map,” Conway said during a recent visit to a half-mile swath of riverbank just south of the Roebling Aqueduct Bridge. “It literally fueled the Industrial Revolution with the coal it carried. It’s our unique story and it’s forgotten, and the children who worked on the canal are the ‘forgotten-forgotten.’”

The verdant patch between the Delaware River and Route 97 used to be the towpath for the D&H. Scrub brush has been mowed into a wide path that will become a hiking trail from the Barbara Yeaman Eagle Observation Blind north to an existing D&H Canal trail that leads under the Roebling Aqueduct Bridge, in the first phase of the project. The second phase is edging and paving the trail (with asphalt, stones, cinders or other material), and installing bluestone benches and educational signage, which Conway hopes to complete by the end of this summer.

But why call it “The Kate Project”? E.L. Henry’s 1891 painting “On the Towpath,” depicting a little girl leading two mules along a canal towpath, hangs in Conway’s home. Familiar with the history of children (called “hoggees”) toiling on the canal, Conway was struck by the idea of a statue of a child on the towpath itself. The Delaware Company, a nonprofit for which she is executive director, is raising money for that statue, which is the project’s third phase. The statue’s name was born during friendly discussions of the project.

The history of child labor on the canal is sad: Often, they were adopted out of orphanages specifically to work on the canal, and their lives were valued only as much as those of the mules they led—or even less so. Conway said those children deserve their place in history, and she feels The Kate Project will help educate people.

“There already is activity here; people are already doing the hike,” she noted. “People want a different kind of outdoor experience.”

Conway and her husband, Sullivan County Historian John Conway, have touted heritage tourism, and The Kate Project ties in perfectly with that, she enthused.

“The idea of tourism is to create a unique experience for people that’s educational and something they wouldn’t get from an indoor waterpark,” she pointed out.

Conway was particularly inspired by Ed McMahon, a senior fellow with the Urban Land Institute who spoke at a meeting of the Upper Delaware Scenic Byway in July 2018.

“He asked, ‘What is the soul of this area? What tells the story?’ It’s this,” Conway said, spreading her arms as trees waved in the breeze on the towpath and eagles dipped down into the river.

“With all of this, the towpath, the eagle blind, the Roebling Bridge, the Zane Grey Museum… It is its own little synergistic history spot,” Conway concluded. “And it makes sense for us. We’ve just always been banging the history drum.”

Hoggee
Hello, friend! Care to walk for a spell?
Never seen you before, and I know this stretch well
We don’t move too fast and there’s no incline
The mules will not harm you, just watch out for the line

That’s my father in back idly steering the boat
And my silly brother—swimmin’ nekkid in the moat!
That barge is our home ‘til it gets too cold
Then to the farm, which we own on leasehold

Yes, my mÍom made this dress, also my sun hood
I prefer to go shoeless, tho, which feels very good
I do this stitching between a ‘ho’ and a ‘gee’
Mules don’t listen to much, but they listen to me.

It’s a long and hard trek, the Hudson to Honesdale
But I’ve met so many friends, like you, along this trail.
The man who makes hoops, the lady baking pies
Around one bend, hellos; around the next, goodbyes.

And in the quiet times I can enjoy the view
Though I’ve seen it before, there’s always something new.
Time to think, time to dream, time to make up a song
And sing it up to the mountain and the echo sings along.

Time to say farewell? A word that I hate!
But we’ll meet again and again. By the way, I’m Kate.
— Gary Holmes