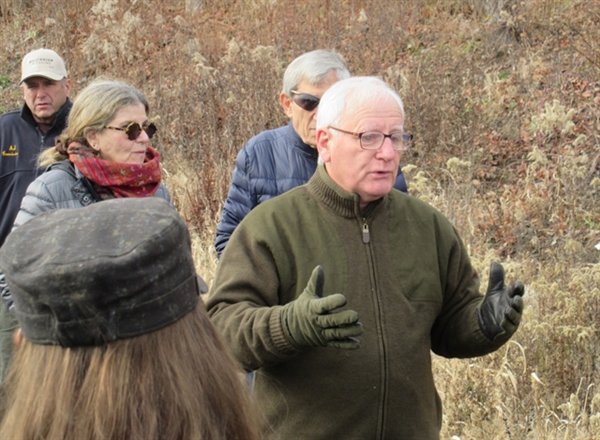 About 30 people recently braved the chilly temperatures to learn a little more about Hurleyville and Sullivan County history. County Historian John Conway narrated the hike along the two miles of paved Rail Trail, once part of the O & W Railway, heading east from Hurleyville toward Ferndale, and now open for recreational use. The hike started at the Hurleyville train depot, which early on had been renamed Luzon Station, so as not to be confused with Hurley in Ulster County, where luggage was often mistakenly sent.

Originally a wooden structure, it was later built of brick and expanded to accommodate the increasing dairy product trade and increased tourism. Once the railroad came through, the population of the Hurleyville area grew rapidly.

Conway told of the downtown Hurleyville fires in August and October of 1911 that burned several businesses and hotels, at the corner where the Hurleyville Arts Centre is now located.

Early residents relied mostly on subsistence farming due to the poor soil. Conway recounted an old saying, “How do you tell when you get to Sullivan County? There are two stones for every dirt.”

Also, the soil lacked nitrogen, making large scale crop production difficult. Dairy farming was expensive, so many people only had a cow or two for personal use. After the train opened up the metropolitan market for dairy products, dairy farming took off. Creameries sprang up all along the rail line to convert milk to other dairy products such as butter and condensed milk. As late as 1900, there were about 4,000 working farms averaging 100 acres in the county, most of these being dairy farms. Therefore, this section of the railway has been designated as the Milk Train Trail.

Conway explained, “Each and every milestone in Sullivan county’s history can be traced to a major breakthrough in transportation.”

In the late 1700s, the timber rafting industry employed thousands of men taking timber down the Delaware. When the Newburgh-Cochecton Turnpike was completed in the early 1800s, the population of Sullivan County doubled. Later, the completion of the D & H Canal contributed to another doubling of county’s population to roughly 25,000 in the following 20 years. The railroad was likewise another transportation breakthrough, increasing access and opportunity for people in the county. Conway noted that calling the O&W a railway and not a railroad was an effort to attract British and other European investors.

The hikers were also treated to information from horticulturist Eve Minson. Minson related that the Lenape survived in the area for thousands of years, relying on the existing flora. She pointed out the abundance of huckleberry bushes and low growing dewberry which added vitamin C to early diets. She made note of the many white birch growing along the trail.

Even the invasive Japanese knotweed has positive qualities: it’s attractive to bees and birds, it’s edible and, according to Minson, may possibly offer protection from Lyme disease.

Conway mentioned that hemlock trees, at first thought to be a worthless nuisance, became an important part of local industry when a process for using the bark to tan leather was developed.

Unfortunately, the cutting of the hemlock groves caused a decrease in the number of native trout. The dense canopy of hemlock had kept streams cool, a condition in which trout thrive. Later the railroad restocked the streams and lakes with trout and other fish to promote tourism and rebuild the fishing industry in the area.

Conway distributed to the hikers copies of his book, “Blessed by the Gods,” which praises the county’s history as a healing environment. At the conclusion of the hike, he encouraged all to hike the rail trail again on their own and enjoy the nature of the area.