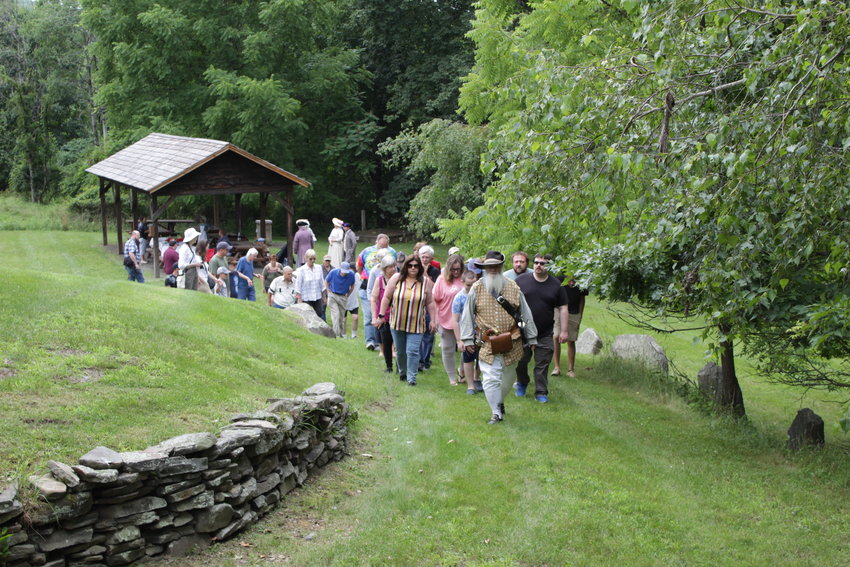 Fort Delaware reopens for a day, to mark a momentous day

NARROWSBURG, NY — The call went out: come hear the news.

The residents clustered around a wagon, on which stood the visitor—a town crier, bringing word from the Continental Congress, who unrolled a long scroll and began to read.

This was, of course, July 10, 2021, and the place was Fort Delaware. Now managed by the not-for-profit Delaware Company, it opened its sally port (back door) to a crowd. They came to see the fort, listen to the privateer, the blacksmith and the armorer talk about 18th-century life, and they came to hear the Declaration of Independence proclaimed as it had been 245 years ago.

Fort Delaware itself was as much of an attraction as the reading. Originally, it “was not a military fort, it was a stockaded settlement,” Sullivan County Historian and Delaware Company President John Conway said. In times of need, area residents could be safe behind the fort’s log walls.

“This was the howling frontier here,” said George Kane, a reenactor from the Navasing Longrifles, who was portraying a privateer, complete with an impressive array of weapons about his person. “This was wild country. If you wanted venison, you couldn’t go to ShopRite, you sent a family member out” to hunt.

“A rich part of Sullivan County history,” legislature chairman Rob Doherty called Fort Delaware. He spearheaded the final move to a public-private partnership that put the Delaware Company in charge. “It’s a shame that politics played a role and it took years for the fort to reopen.”

The day also featured a Loyalist response to the Declaration.

That’s unusual these days, but was pretty common back in 1776. And maybe especially so here. “Orange and Ulster were Patriots,” John Conway said. But this area was dominated by the tribes, who were Loyalist. And so, probably, were the white settlers who lived around Cushetunk.
.
We don’t know what was said then, but maybe it was like Bill Chellis’ lengthy speech calling on listeners to support the king and tradition, not the untried, rebellious, and potentially deadly.

Chellis, vice-president of the Delaware Company, was portraying Robert Land, Loyalist and area resident. Land’s eventful life during the Revolution (spying for the king, escaping execution, miraculously being reunited with his wife and children in Canada) deserves a movie.

“The abuse of the Tories is a story America hasn’t told,” Chellis said later.

Loyalists had their homes burned down. They were tarred and feathered. (And sometimes the tar was hot). They were run out of town, along with their families. Many Loyalists, like Land, emigrated to Canada.
But that was probably not uppermost in people’s minds that day. The audience listened to Conway, now portraying the town crier as he read the Declaration of Independence.

“We hold these truths to be self-evident, that all men are created equal, that they are endowed by their Creator with certain unalienable Rights, that among these are Life, Liberty and the pursuit of Happiness.
“That to secure these rights, Governments are instituted among Men, deriving their just powers from the consent of the governed.

“That whenever any Form of Government becomes destructive of these ends, it is the Right of the People to alter or to abolish it, and to institute new Government, laying its foundation on such principles and organizing its powers in such form, as to them shall seem most likely to effect their Safety and Happiness.”

Original article can be found here.